Look for these two novels from Washington authors this month: 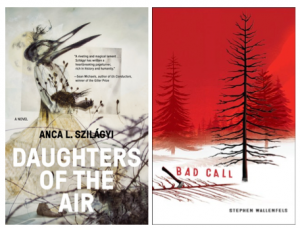 Daughters of the Air by Anca L.Szilagyi: Tatiana “Pluta” Spektor was a mostly happy, if awkward, young girl—until her sociologist father was disappeared during Argentina’s Dirty War. Sent a world away by her grieving mother to attend boarding school outside New York City, Pluta wrestles alone with the unresolved tragedy and at last runs away: to the streets of Brooklyn in 1980, where she figuratively—and literally—spreads her wings. Told with haunting fabulist imagery by debut novelist Anca L. Szilágyi, this searing tale of love, loss, estrangement, and coming of age is an unflinching exploration of the personal devastation wrought by political repression. Szilagyi lives and writes and teaches in Seattle.

Bad Call by Stephen Wallenfels: From Kirkus Reviews: A group of teens embark on an ill-fated camping trip in this survival story. Four tightknit but competitive friends from a Southern Californian boarding school are pushed by their ringleader, Ceo, into taking a clandestine backpacking hike in Yosemite. When one boy backs out, wealthy, charming Ceo takes the opportunity to invite Ellie, a young woman whom he previously met at a theater-arts workshop, to join them, further upsetting the already troubled balance. The narrative alternates between Colin, an earnest scholarship student, and Ellie, whose confident athleticism distinguishes her from Ceo’s usual conquests, moving between the present and past, carefully meting out details and successfully ratcheting up the tension as elements both meteorological and psychological begin to take their toll. … A gripping, well-paced thriller that strikes a menacing tone, this will appeal to those looking for a good scare.” Wallenfels lives in the Tri Cities.