A Passport to Washington Libraries – Oh the places you’ll go! 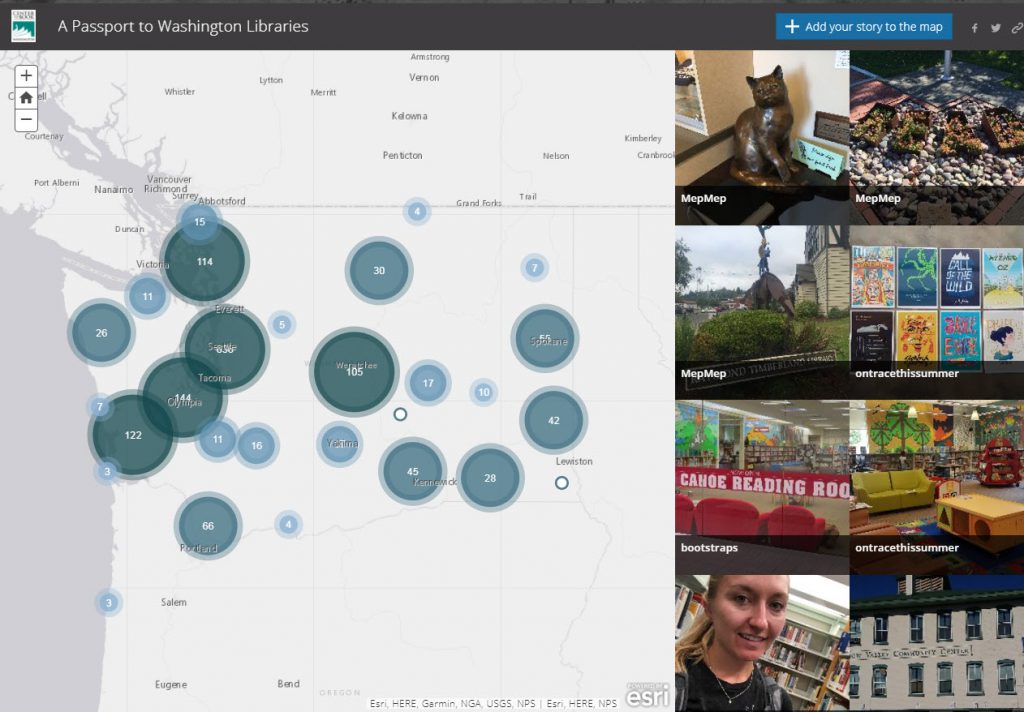 Last year The Seattle Public Library and the Washington State Library decided to join forces on the Washington Center for the Book (WCB).  Each organization brought an existing program to the partnership, however we have also been working busily all year to lay the groundwork for new programs.

One of the changes that was important to all of us was to create programs that impact the entire state.  So starting with our mission we came up with the idea of creating a statewide Library Passport program.   Originally we planned to use a physical passport that people could take around the state on their summer vacation, but ultimately we decided to embrace technology and create a live updating interactive map.

With any new idea or program, you never know if it will work the way you envision it.   We didn’t want to make work for libraries, which we knew were already overloaded in the summer.  We wanted to make it easy and fun.  The fun factor started with a delightful map designed by Amy Hevron.  Amy lives in Washington and is a children’s book illustrator.  We requested a map of Washington that was playful, colorful, and promoted reading and literacy and we could not be happier with the end result.

Using an ArcGIS’s Storymap app we set up the mapping program and sent posters and postcards to all the public libraries in Washington State.

Much to our delight the passport has been embraced by Washingtonians.  In the first month over 1100 visits were logged. Families on road trips stop to explore new libraries. Grandmothers have made it their mission to take grandchildren out on library exploration trips, individuals use their weekend jaunts to discover new libraries in their area, and the list goes on and on.

As each upload includes something learned during your visit, we’ve also learned a lot about our state’s libraries, and we thought we already knew a lot!  Here are a few tidbits that we’ve learned so far:

But don’t take our word for it.  Why not visit the map and see all that people are discovering?  Or better yet why not join in the fun?  Everything you need to know to participate can be found here.  Happy travels and happy discoveries.  We can’t wait to hear what you learn.