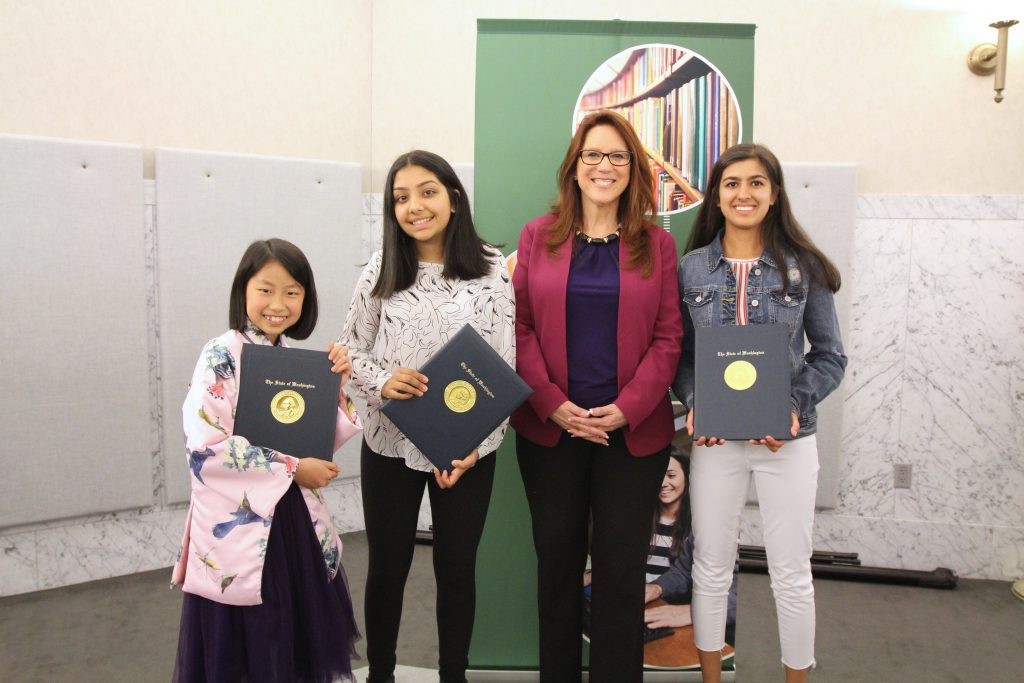 Annabelle Yan, a fifth grade student at Medina Elementary School in Medina, is the Level 1 champion.Anna wrote her letter to Grace Lin about her book Dumpling Days.

Riya Sharma, an eighth grade student at The Overlake School in Redmond, is the Level 2 champion.  Riya wrote her letter to Katty Kay & Claire Shipman about their book The Confidence Code.

Amina Khan, a tenth grader from Gig Harbor is the Level 3 champion. Amina wrote her letter to Yann Martel about his book The Life of Pi.

Runners Up and Honorable Mentions

Our special thanks to this year’s judges:

2,418 Washington students submitted letters for the 2018 contest, and 92 semifinalist letters returned to WA for the final state judging. From the 92 semifinalist letters, the state judges selected three champions, three second place runners up, and 29 honorable mentions. The three champions’ letters have been sent to the Center for the Book at the Library of Congress for the national competition. The results of the national judging will be announced in early May.

86 teachers from 63 schools submitted letters written by their students (link) In addition 15 individuals  from around the state entered this year’s contest. We appreciate the support of teachers, librarians, and parents for Letters About Literature.

Letters About Literature encourages young readers to read a book and write a letter to the author about how the book changed their view of the world or themselves. Students can write about works of fiction, nonfiction, or poetry. Letter writers compete at three levels: Level 1 is grades 4-6, Level 2 is grades 7-8, and Level 3 is grades 9-12. State judges select the top letter writer in each level and those letters advance to the national competition. One national winner per level receives a $1,000 cash award and one national honor per level receives a $200 cash award.

The 25th annual writing contest for young readers is made possible by a generous grant from the Dollar General Literacy Foundation, with additional support from gifts to the Center for the Book in the Library of Congress, which promotes the contest through its affiliate Centers for the Book, state libraries and other organizations.  This is the thirteenth year that the Washington State Library, a division of the Office of the Secretary of State, has been part of the contest.  It is also the first year that the contest is sponsored by the Washington Center for the Book (WCB).  The WCB is a new partnership between The Seattle Public Library and the Washington State Library.  The mission of the WCB is to promote literacy and a love of books, reading, and libraries.

To find out about Washington’s participation in past Letters About Literature contests and to read winning letters, please visit this page.