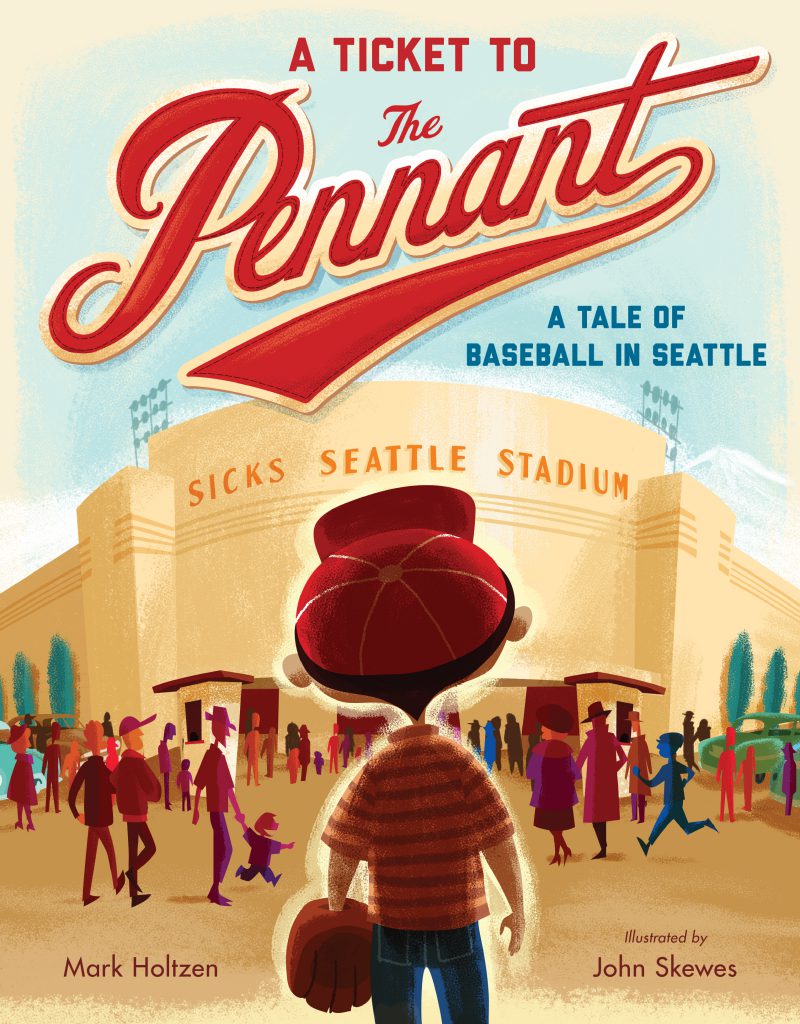 Each year a list of books representing the literary heritage of the 50 states, the District of Columbia, and the U.S. Virgin Islands is distributed by the Library of Congress’s Center for the Book during the National Book Festival in Washington D.C. We are delighted to announce the Washington Center for the Book’s 2018 selection to represent Washington state: A Ticket to the Pennant: A Tale of Baseball in Seattle by Mark Holtzen, illustrated by John Skewes. The book will be featured at the Washington booth at the National Book Festival, Sept. 1, 2018, in Washington D.C. and will be included in the 52 Great Reads brochure distributed at the Festival.

About the book:
Travel back in time to 1955, when the Seattle Rainiers faced the Los Angeles Angels for the pacific Coast League pennant. Follow Huey, a young baseball fan, as he retraces his footsteps through South Seattle, trying to find his missing ticket to the big game. Meet Huey’s neighbors – grown-ups and kids from different backgrounds and cultures, all united by their love of baseball and their Seattle Rainiers. Mark Holtzen weaves adventure, history, and sports into a charming and timeless tale. John Skewes’s retro-style illustrations incorporate mementos from Seattle baseball history in this story of regional pride, community, and the love of the game.

Mark Holtzen: Mark and his family live in Seattle, WA. He taught third grade for sixteen years and loves to create children’s books.
John Skewes: John is a professional illustrator living in Seattle, WA. As the creator and illustrator of the award-winning Larry Gets Lost ® children’s book series, John has followed Larry from the southern tip of Texas to tiny Nome, Alaska, and has been lost several times himself.

A Ticket to the Pennant: A Tale of Baseball in Seattle was published by Little Bigfoot, an imprint of Sasquatch Books, in 2016. It was a finalist for the 2017 Washington State Book Award and named an SCBWI Summer 2016 Reading Pick. Kirkus Reviews said, “Skewes’ bright, retro-flavored cartoons complement the text, vividly capturing the time and place as well as Huey’s changing emotions. Sweet and wistful nostalgia for a bygone era.”

Background and supplemental information on research for the book can be found at Mark Holtzen’s website.

A note to teachers! Sasquatch Books offers a Common Core guide for use with A Ticket to the Pennant.

We are so excited to share this book at the National Book Festival!